What is Mold (filamentous fungi)?

Mold is a fuzzy growth on moist organic matter by several types of fungi. The quantity of mold fragments and spores needed to cause health problems varies from person to person. Besides inhalation, people can become exposed to mold through skin contact and air-borne spores.

Toxic molds can produce several toxic chemicals called mycotoxins that can damage your health. These chemicals are present on the spores and small mold fragments that are released into the air. In high concentrations, mold fragments, spores, and mycotoxins can trigger symptoms even in individuals who have no allergies.

Some molds live in temperatures below freezing, and some like it as warm as 122° F. Molds primarily thrive and become a problem when the relative humidity level is above 60%, with temperatures between 50 and 90 degrees F. (10 to 32 degrees C.) and a pH from 3 to 8. Molds also tend to be more robust in poorly ventilated areas with little air movement to disrupt their growth.

There is no practical way to eliminate all mold and mold spores in the indoor environment; the way to control indoor mold growth is to limit moisture. During humid weather, avoid excessive ventilation and use air conditioners and/or dehumidifier to keep relative humidity below 60%. Sealing air leaks in the building’s exterior and using a mechanical ventilation system to provide fresh filtered air can help to reduce the entry of mold spores and make it easier to keep indoor relative humidity below 60%.

Indoor mold growth usually can be seen or smelled. In some cases, mold can be invisible and testing is necessary to be detected. There are no health or exposure-based standards that individuals can use to evaluate a mold sample. The amount of mold it takes to cause illness varies from person to person.

Health Effects and Symptoms Associated with Mold Exposure
There are four kinds of health problems that come from exposure to mold:

Mold can trigger an allergic reaction and asthma in sensitized individuals (repeated exposure to mold or mold spores sometimes causes previously non-sensitive individuals to become sensitized). About 15 million Americans are allergic to mold. The most common reactions are flu-like symptoms and asthma. Those with chronic lung or immune problems are at risk for more serious reactions like fever, lung infections and a pneumonia-like illness.

When mold grows indoors in moist organic materials, building occupants may begin to notice odors and suffer a variety of health problems associated with mold exposure. 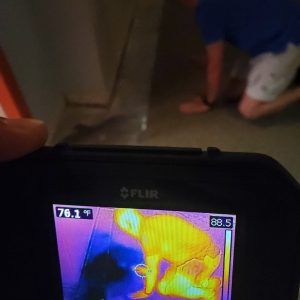 Molds can trigger asthma attacks in persons who are allergic (sensitized) to molds.

Even in non-allergic (non-sensitized) people, mold exposure can cause irritation of the eyes, skin, nose, throat, and lungs of both mold-allergic and nonallergic people.

Healthy individuals are usually not vulnerable to opportunistic infections from airborne mold exposure. However, molds can cause common skin diseases, such as athlete’s foot, as well as other infections such as yeast infections.

Hypersensitivity pneumonitis may develop following either short-term (acute) or long-term (chronic) exposure to molds. The disease resembles bacterial pneumonia and is uncommon.

Mold spores are hardened containers, which possess all the DNA instructions needed to create new mold creatures, aerial eggs as it were. If they bump into dry walls they just rebound and go back to floating, but when they bump into wet walls they stick. Out of the broken open shell, a single creature’s body appears, then a groping arm grows from that body, a leathery hypha, albino and clear, and then from that hypha grows another, and another, and then many, many others more. These hyphae are used by molds to obtain nourishment. For some species it is the sulfur grains in concrete that are sought, in others it’s the metals in paint, or the glue in wallpaper, or even, for one especially abundant species, found at some time in almost every house in northern temperate climates, it will be the actual antibiotic poisons that the wood they land on produces which they slurp up and use as food. The hyphae excrete enzymes that break down complex organic materials. All over your house, these freshly appearing mold creatures will plug into the walls via their hyphae.

Mold typically grows on organic materials that remain moist for more than 24 hours. Materials exposed to high humidity can become moist enough to support mold growth.. The volatile organic compounds (VOCs) released by some molds are toxic and associated with “Sick Building Syndrome”.

Not everything the hyphae absorb can be handled by the main body of the creature further back. Many are too poisonous, and any mold that did accept them would lose its suction grip, unplug from the feeding spot, and fall poisoned to the floor. The way they get out of this problem is by spraying out the excess they don’t need, releasing it in gaseous aerosols. At any moment during the day, there will be freshly landed molds on the room walls in your home, aerosolizing carbon dioxide, hydrogen cyanide, ethanol fumes, various alcohols, and much else. Concentrations are generally too low to detect except with special equipment, but there are exceptions. Some are favorable, as with those wall molds related to the wild truffles, which produce an especially delectable emanation; but some of the exceptions are less pleasant, as with the molds that produce a musty or a rubbery smell. When the mold levels are high enough to produce this you’re likely to be able to see them too, enormous colonies, which appear to us as an unpleasant fur. But even when the density is too low to see they’re there, many thousands of separately plugged in mold individuals on a home’s inner walls. In older houses, old layers of paint surviving from the 1920s are likely to contain arsenic — it was used as an oil binder — and fungi plugging in from newer layers above will spray out an arsenic derivative like everything else. At one time this was a hazard, but now there’s so little of this old paint left around that it doesn’t matter. The last poisoning in England from an arsenic derivative released by wall fungi was in 1931.

If enough moisture is available for the mold to emerge from hibernation, they are very likely to start growing on your walls. Most of the mold spores you get were probably produced locally, and any especially damp building in the neighborhood will act as a fertile nursery. Other mold spores come from further away, and the British meteorological service’s sampling aircraft have detected them arriving in Britain across the sea from all sides, with buoyant flights across the North Sea from Denmark taking only two days or so with a fair wind. In the U.S. they can be blown from Texas to Minnesota within a week. The spores can last up to forty years before hatching.

Molds require one or more organic nutrients. Because molds must absorb or transport their nutrients through the cell surface, they compete with bacteria for organic nutrients. Many molds have an advantage over the bacteria in this competition, because they can secrete digestive extracellular enzymes such as cellulases. Thus they can degrade an otherwise insoluble organic substrate into its smaller soluble subunits, which they then absorb and use as sources of carbon and energy. This enables the molds to use carbon sources — including cellulose, lignin, and keratin (a common component of hair, nails, and feathers — that are unavailable to most other microorganisms.

Physiologically the molds are very “hardy” and versatile organisms. They tolerate and often thrive at environmental extremes, such as the high sugar concentrations of jams and jellies, the acid pH occurring in acid-curdled milk and in fruit juices used to make wine, and the near-freezing temperatures in a refrigerator (hence the common appearance of mold in refrigerated foods).

Current evidence indicates that the most common symptoms caused by molds are allergies. If you are susceptible to mold and mold is seen or smelled, there is a potential health risk; therefore, no matter what type of mold is present, you should arrange for its removal.

Mold in Your Home?

An insurance company is more likely to cover mold contamination if it results from a covered accident, such as a water line break. If you feel that your insurance company is unfairly denying your claim, you can contact a law firm that has been successful in helping other policy holders that have mold damage to their health or property. For further details, give us a call.